Update: My picks have been corrected with the winners inserted.  Check it out below.

Alright folks.  Its that time of the year!  As someone that loves the movies, I truly enjoy the fanfare and pageantry of Oscar night.  Although I will most certainly yell at the t.v. at some point tonight, I still enjoy the award’s show.  I commented on a previous post on the silliness of the change in the number nominations for best picture so I’ll keep it simple with my picks.  I’m going to reserve my commentary for the main categories.

Best Picture: Of all the nominees in this category, I liked “Up in the Air” the most.  Yet I think James Cameron brings this one home.  I don’t think it was a better movie than Kathryn Bigelow’s “The Hurt Locker.”  But the movie is still quite the accomplishment.  Avatar was a game-changer as far as m0vie-making goes, even if it was utterly boring at times.  Prediction: Avatar

Actress in a Leading Role: I could watch Meryl Streep read the phone book.  So it wouldn’t be a shock if she brought an Oscar home for her portrayal of Julia Child in “Julie & Julia.”  But I think Sandra Bullock’s got the wind at her back.  Prediction: Sandra Bullock (The Blind Side)

Actor in a Supporting Role: Okay scratch that.  THIS is the surest bet in the game.  Prediction: Christoph Waltz (Inglorious Basterds).  One of the most compelling villains I’ve ever seen in a movie; no joke.

Actress in a Supporting Role: Vera Farmiga does a bang-up job opposite George Clooney in “Up in the Air.”  But I enjoyed Anna Kendrick’s performance a tiny bit better.  Still, they both paled in comparison to Mo’Nique.  Prediction: Mo’Nique. (Precious)

Best Director: Kathryn Bigelow edges out her ex-hubbie James Cameron (Avatar) and Quentin Tarantino (Inglorious Basterds) with one of the best movies I’ve ever seen about war.  With so many stories already told about the Iraq War, Bigelow figured out a way to make this one riveting.  Prediction: Kathryn Bigelow (The Hurt Locker)

In full disclosure I have not seen every movie that’s been nominated so some of these are educated guesses.

By now I’m sure you’re aware that Academy Award nominations were announced today.  If you’re as big a geek as I am, you’ll notice that

the brain trust at the Academy decided to change the format this year.  In response to a sharp decline in viewers (a drop of nearly ten million viewers over the last decade), the Academy of Motion Picture Arts and Sciences decided to expand the field of nominations in the Best Picture category to ten.  Although the logic behind the move makes some sense, this move is ultimately silly.  For several years, the movies nominated in the best picture category were less than inspiring, if not inclusive (see Atonement, No Country for Old Men).  This led many to believe that viewership was down because very few had actually seen many of the movies that were nominated.  Expanding the category for Best Picture was a response to that issue.  My problem with the move is that it undercuts the spirit of the awards.  The Academy Awards are supposed to symbolize the pinnacle of achievement in motion picture.  As such, winning an Academy Award shouldn’t be something that is easily attained.  Logic would dictate that expanding the field of potential winners makes an Academy Award less exclusive.  Having said that, here are a few observations on some of the major categories:

Best Picture: Like last year’s nominees, there are some good but not great choices here.  I know I shouldn’t be, but I am a little surprised that The Blind Side was nominated here.  Setting that aside, I’m starting to get this sneaking feeling that Avatar will win best picture but who knows.  On a positive note, I’m glad to see the Coen brothers’ A Serious Man sneak in here along with District 9.  Interestingly, Bodog lists Up in the Air as laying the best odds.

Best Actress: Its probably time I gave the Blind Side a bit more due as it looks like Sandra Bullock is the odds-on favorite here.  I’m sure that the incomparable Meryl Streep will garner some consideration, but this appears to be Bullock’s to lose.

Best Actor: I think there are some great choices here.  I  really enjoyed Morgan Freeman’s performance in Invictus and I loved George Clooney in Up in the Air.  Still, Jeff Bridges (or the dude if you’re into the whole brevity thing) appears to be headed for his first Oscar.

Best Actress in a Supporting Role: I think this one could get interesting.  Mo’Nique comes in with some momentum stemming from her Golden Globes win for her role in Precious.  But I think Vera Farmiga (Up in the Air) may give her a run for her money.  Personally, I thought Anna Kendrick was a shade better than Farmiga as the Yin to Clooney’s Yang.

Best Director: Again, I could see this going to James Cameron for Avatar.  For me its a tough call between Tarantino (Inglorious Basterds), Kathryn Bigelow (The Hurt Locker), and Jason Reitman (Up in the Air).  I would love to see Bigelow become the first woman to ever win an Academy Award for best direction.  Reitman will have his day in the sun with his adapted screenplay nod.  Tarantino already has an Oscar for Pulp Fiction and is nominated this year for Best Original Screenplay.  Besides, Bigelow is a great director and she did an awesome job with The Hurt Locker.

#4.  Almost Famous [2000]: I’ve long since been a huge fan of Cameron Crowe’s films for a variety of reasons.  Crowe’s films are typically well-written, well-acted, quirky and they all feature excellent music.  Without question, Almost Famous is the best of his illustrious career.  Almost Famous is a semi-biographical movie about fictional teenage writer William Miller who gets the ear of Rolling Stone magazine.  Impressed with his work and mistaking Miller for someone much older, the magazine hires him to do a story on the fictional band “Stillwater.”  Despite being underage, Miller embarks on a trip around the country, riding along with the band and its groupies.  Among those groupies is the lovely Penny Lane (played quite well by Kate Hudson),  with whom Miller promptly falls in love.  Miller’s adventures mirror those of Crowe, who as a teenager traveled the country writing for Rolling Stone.  Along the way Crowe interviewed some of the most influential bands of the 70s such as Led Zeppelin, the Eagles, and the Allman Brothers.  Like several other movies by Crowe, his wife and Heart lead guitarist Nancy Wilson provides a wonderful score.  The soundtrack is filled with some of the greatest songs of the last 30 years.  In sum its a great movie, tells a great story, and is just downright fun from the beginning to the end. 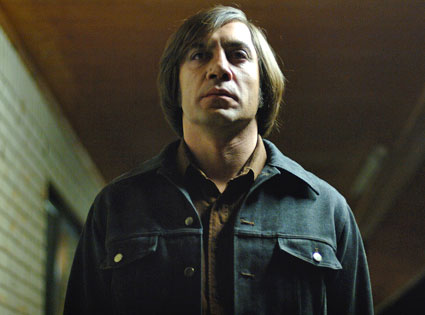 #3.  No Country for Old Men [2007]: Not since Hannibal Lecter have we seen a villain as treacherous and deadly as the sociopathic Anton Chigurh.  As the most celebrated movie in the Coen brothers (Joel and Ethan) canon, No Country for Old Men, is a thriller that revolves around a mysterious suitcase full of money, the lowly guy that found it, and the small town Texas sheriff, who sets out to find them both.  Javier Bardem plays Chigurh, Josh Brolin stars as Llewelyn Moss, the guy that finds the suitcase, and Tommie Lee Jones is the sheriff.  Based upon a novel written by Cormac McCarthy, No Country for Old Men is generally dark in tone, which is a departure from many of the Coen brothers’ other movies.  Although there are some similarities (excellent dialogue), the movie has a element of terror that is unseen in their other films.  Visually, the film brilliantly captures a vast desolation rarely seen in movies.  Tommie Lee Jones is great as the wise old sage, on his way out of the game.  Brolin turns in a strong performance of his own, establishing a relevance among other Hollywood actors otherwise unseen, and Bardem is simply brilliant.  As the villain, Bardem is quite captivating, going from charismatic to terrifying in one fell swoop.  As an enormous fan of the The Big Lebowski, its hard to imagine the Coen brothers making anything better, but this one comes damn close.

#2.  Eternal Sunshine of the Spotless Mind [2004]: I really struggled with this one.  For several weeks I had this one as #1.  Yeah, its hard to imagine given how many great movies I’ve chronicled, but this truly is a great movie.  From beginning to end its brilliant, and in all aspects.  Technically its well shot.  In particular, the dream sequences are visually quite striking.  The acting is top notch, as the chemistry between Jim Carrey and Kate Winslet is strong.  But what really sets the movie apart is the story.  Written by Charlie Kaufman, the Director Michel Gondry, and Pierre Bismuth, the movie is about Joel (Carrey) and Clementine (Winslet) who date each other, break up, and then decide (separately) to get the memories of the relationship erased from their collective minds.  Without spoiling the rest, I’ll simply say that they way in which the two meet and then date probably says more about relationships than perhaps any other movie I’ve ever seen.  Although they both use a method to forget each other that is clearly impossible, seeing the lengths to which both are willing to go to mitigate the emotional pain says a lot about the power of human emotion that comes from relationships.  The movie takes you on quite a ride but its funny, painful, and captivating the whole way through.

#1.  Kill Bill, Parts 1 & 2 [2003-2004]: During my childhood I spent many afternoons with my two brothers, glued to the television watching Kung-Fu theater.  As such, my appreciation for martial arts movies was cemented quite early in life.  So it was with much anticipation that I awaited the release of both installments of Kill Bill. After all, Quentin Tarantino is the greatest filmmaker of our time, so it would only make sense that Kill Bill was a masterpiece.  Well, Tarantino’s project did not disappoint.  Uma Thurman stars as the protagonist – Beatrix Kiddo, or “Black Mamba” – who embarks on a mission to settle scores with her former cohorts who together operated as a group of world class assassins.  The late David Carradine  stars as “Bill,” and is the leader of this group.  At its core, Kill Bill is a movie about revenge, but there is much more to this movie than just revenge.

What I like most about Kill Bill is that it is an homage to so many genres of film.  Most importantly, the old kung fu films of the 70s and 80s that I grew to love.  But Tarantino takes the many influences that shaped him as a filmmaker and then blends them with his own brand of filmmaking.

As is customary of Tarantino films, the story telling is out of sequence.  But what makes it all the more compelling is the scope of the characters.  Considering the lengths that Tarantino goes to develop the various characters, its no surprise that it took two movies to tell the story.  Aside from the storytelling, the dialogue is, not surprisingly, top-notch, and the action sequences are amazing.  Tarantino weaves in vivid animation sequences to give the movie even more life.  Set to a a great score by the incomparable Rza of Wu Tang fame, Tarantino goes to great lengths to tell his story.

Over time, I may grow to like this movie even more.  As it currently stands, I’d say Kill Bill is a close second to Pulp Fiction as Tarantino’s magnum opus.