Katie Stevens: Her performance resembles her whole existence on the show: meh.  The judges think that she’s in search of herself.  I think she’s just young and taking a million suggestions from the judges isn’t helping things either.  Grade: C

Siobhan Magnus: Pretty ballsy with the a capella beginning.  I think this song is right in her wheelhouse.  Pretty good performance.  Save one screechy note, it was pretty “dope.”  Grade: B

Lacey Brown: Not really familiar with the song but I think this was her best performance of the season.  Randy agrees.  Grade: B

Katelyn Epperly: What a nightmare.  She’s still the most talented of all the girls.  But what the F-ck is goin’ on with the song?  Not a great vocal song, and she wasn’t really into it.  I think this girl is lost.  Grade: D+

Didi Benami: I give her props for the Fleetwood Mac (“Rhiannon”) cover.  Not a terrible arrangement, just nothing special.  Grade: B

Paige Miles: I praise her ambition but the execution was pretty shaky.  Right after the key change she was a bit off track with the pianist and she never found her way.  Naturally, the judges offer no quarter.  Its really quite a shame as she may be the best natural singer in the competition.  Grade: C-

Crystal Bowersox: Like last week Bowersox, puts in the best performance of the night, and perhaps the whole season thus far.  Performing Tracy Chapman’s “Give Me One Reason,” she hits it out of the park and she knows it.  Bravo.  Grade: A

Lilly Scott: Although I think she has real talent and charisma, I don’t share the same level of adoration as the judges (Simon notwithstanding).  The performance starts off a bit tame but she really hits her stride towards the end of the piece.  I still think she will stumble once the field gets widdled down and she’s forced to get outside her comfort zone.  Grade: B+

It looks like the girls are beginning to figure this thing out.  Overall, the performances (save a few odd regressions) were much better.  Right now, my top three of the girls are as follows:

If the competition were based solely on potential, the order may differ a bit.  However, based upon their performances, these three have clearly separated themselves from the pack.  I’m less sanguine about the guys.

Crystal Bowersox, 24, Elliston, OH: Her voice sounds great tonight.  Maybe it was just the song last week.  Here, the voice is front and center, no distracting, gratuitous harmonica solos.  Still not diggin’ the presentation but the voice is for real.  Behold, tonight’s pace setter.  Looks like Kara and I are on the same page with the song choice.  Grade: A-

Haeley Vaughn, 16, Fort Collins, CO: The best part of the whole segment was when Simon spoke.  “It was a complete and utter mess.”  Ditto.  Grade: C–

Lacey Brown, 24, Amarillo, TX: After murdering “Landslide” last week, “Mmmbop” would have been a vast improvement.  Not bad.  Better.  But again, that’s not saying much.  She’s just not that good.   Grade: C

Didi Benami, 23, Knoxville, TN: Not the best choice for her, given her range.  She needs to do more of the organic granola stuff as I don’t think she has the chops for soul music.  Randy agreed.  Grade: C

Michelle Delamor, 22, Miami, FL: A “Creed” song, really?  She’s definitely got the pipes.  But there is zero charisma on stage.  And the arrangement was dreadful.  I don’t really get Kara.  “You believed in it.”  So the f- what.    Grade C+

Lilly Scott, 20, Denver, CO: Her singing is pretty good.  She showed more range than what I thought she had.  Thank GOD for Simon.  He was the only one that brought up the obvious and inescapable fact that Crystal was actually better, despite not being as ambitious.  Grade: B

Katelyn Epperly, 19, West Des Moines, IA: For once, someone actually played an instrument that played a clear role in the performance.  I think she’s dynamite.  If it wasn’t for one note, I would have given a nudge higher.  She actually has talent.  I agree with Kara 100%.  I think Simon has a point too with the cheesy looks on stage.  Grade: B+

Paige Miles, 24, Naples Florida: One of the few from this year that has a naturally beautiful voice.  Quite effortless.  She may have the best voice in the competition.  Her only problem is that she doesn’t jump out of the screen, even if she’s got great eyes to match that booming voice.  Judges were sour on her, but I liked it.  She’s a great talent but I see the judges playing her like they used to play Melinda Doolittle.  Grade: A-

Siobhan Magnus, 19, Cape Cod, MA: Look, the kid’s got a great voice but there are limits.  I mean singing Aretha Franklin is a tall task.  Unfortunately, I didn’t think it held up that well, energy and big notes notwithstanding.  The judges were enraptured with her performance.  Again, Simon and I are on the same page.  Grade: B-

Aside from the ascot, I see absolutely no value in having Ellen DeGeneres on the show.  On balance, the girls improved dramatically.  So far I’ve got Crystal Bowersox as the sentimental favorite, with Lily as the dark horse.  Overall, the favorites have to be Crystal, Kately, Siobhan, and Didi on the women’s side.

As side commentary, I hate the inconsistency of the the judges’ comments.  On one hand its perfectly fine to take on big songs (see Siobhan’s cover of “Think”) even if you miss notes, but not for others.  They’ll kill some of the contestants for missing notes but no others.  I thought Siobhan was pretty rough in a few spots and only Simon called her on it……just seems strange. 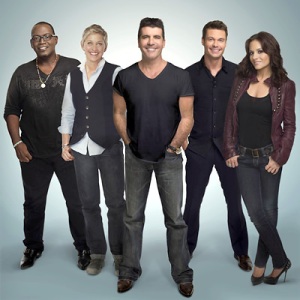 Ah yes, another year of American Idol.  Yeah, yeah I know, how could I guy like me (self-professed music snob) watch a show like that?  Simply put, I love music, in all forms, cheesy or not.  I’m not sure how much I’ll like the show once Simon Cowell is gone, but I do enjoy the show, so why not blog about it?

Tonight’s episode marks the first full episode I’ve watched this season.  I don’t really get into the competition until they weed out all the b.s. and the the crazies.  As a practical matter, I kinda like Ellen DeGeneres.  I don’t think she’ll ever measure up with the appeal that Paula Abdul brought every week being the train wreck that she was, but she’ll do.  One more thing: I really wish they would keep the best singers regardless of sex.  I get why they want balance but it just seems criminal to me to keep some of the hacks they brought in just to make ratings.  With all of that said, here are my thoughts on the women:

Paige Miles, 24, Naples Florida: awful first song, “All right now” classic example of going away from what worked for you before just so you can prove versatility.  First couple of notes really off.  My guess is she was getting used to to the acoustics, sound on stage.  As usual, I agree with Randy the most.  Great voice, terrible song choice.  Grade: B+

Ashley Rodriguez, 22, Chelsea, MA: A bit rough IMO.  Not a big fan of the song and she was all over the place vocally…next!  Grade: D

Janell Wheeler, 24, Orlando, FL: Classic token-blonde.  The only reason why this chick made it to the top 24 is her looks.  This is the kind of crap I detest about Idol, as I think it completely undermines whatever credibility the show has as a talent show.  To make things worse, the judges claim to like her voice and her performance.  Grade: C

Lilly Scott, 20, Denver, CO: Without hearing her rendition of the wonder Beatles tune “Fixing a Hole” I knew it would suck….it did….she redeems herself…. a little, but its the absolute worst song for this kind of competition as it is a SINGING competition.  She’s unique, but not really cut out for this type of medium.  I’m beginning to think the judges all smoked some pot before the show.  Grade: B-

Katelyn Epperly, 19, West Des Moines, IA: Second Beatles tune of the night.  Much better.  Best performance of the night.  Lipstick’s a little scary, but she’s got the goods.  Maybe she doesn’t win, but up to this point she was the best singer so far.  Glad to see Kara agree with me on her looks.  Ellen slowly losing all credibility.  Grade: A-

Haeley Vaughn, 16, Fort Collins, CO: I cringed when I heard she was doing “I wanna hold your hand.”  I was pleasantly surprised.  I didn’t love it, but it was much better than I would have thought.  She’s gotta be a little careful with the runs but she’s not bad.  As usual, I disagree with Ellen, agree with the others: vocals were a little sketchy.  Grade: C+

Lacey Brown, 24, Amarillo, TX: Early on, not good.  I can see why she didn’t make it last year.  Best part of the performance was the backing vocals.  Grade: D+

Michelle Delamor, 22, Miami, FL: Looks great, great voice and range and some chops to boot.  A bit “forgettable” as Simon would say, but good.  Or as Simon said: no “wow” moment.  Kara DiGuardio says there were some mistakes.  I find that puzzling.  Not that I disagree, but its always interesting to see which contestants they choose to pick on for vocal imperfections  Grade: B

Didi Benami, 23, Knoxville, TN: Whats the deal with all the guitar playin’ hippie chicks?  Doing an excellent Ingrid Michaelson impersonation, she was good.  I just wonder which one of these ladies will prevail as the indie/hippie chick.  Again, no “wow.”  Simon, nails it here.  These chicks are all starting to sound the same.  If we were playing bingo, the word “pitchy” has made its first appearance of the night; now if I could only get an “artistry” I’d be all set.  Grade: B-

Crystal Bowersox, 24, Elliston, OH: Woo hoo!  Another singer with a guitar….this one has dreads and a harmonica!  Aww, she even has an autograph of Melissa Etheridge on her guitar, how cute……decent voice, but the harmonica solo is indulgent and unnecessary.  I like her voice, just not the performance.  Again, Simon is dead on.  The optics seem a bit contrived.  Its like, “look at me, I’m an authentic struggling musician because I have dreads, a harmonica and guitar!  I’m like Bob Dylan but Rastafarian and like twenty years younger!”  Except, your on American Idol!  So either play the game, or move on!    Grade: C+

Katie Stevens, 17, Middlebury, CT: Michael Buble doing Nina Simone, hmmm, yeah not so much.  She’s got a big voice, but she just doesn’t have the goods to do a tune like that.  Too much Streisand, not enough Aretha.  Simon/Ellen said the song was too old, Kara and Randy said it was “pitchy.”  I didn’t think it was great either but compared to everyone else it was acceptable.  Grade: B

The women were mediocre at best as a group.  Again, I think the judges dropped the ball with this group.  Not one person blew me away.  At the end of the day I have to ask: is there a Carrie Underwood, Jennifer Hudson (yes I know she didn’t win but she’s got some serious pipes) or Kelly Clarkson in the group?  Absolutely not.  Considering the amount of people that audition for this show, its almost impossible not to conclude that the judges were driven more by personality than talent.  To be sure, personality is always a strong factor, but it seems more so this year…… here’s to hoping the guys are better.