Yesterday we took a look at the Lions’ needs. Today we’ll discuss some of the players they should target in the first round, based upon their draft position (in order of priority):

While the priority here should be cornerback, I would be happy with the Lions drafting the highest graded player at either OLB, OT, or DE. With that in mind, here are a few guys I that I would love to see the Lions draft in the first round.

With Patrick Peterson presumably off the board, Amukamara would serve as a nice consolation prize, were he to fall to the Lions at 13. Amukamara is a former prep running back that switched to defense while in college, at the insistence of former head coach Bo Pellini. Amukamara has good size and speed, and plays with great recognition. As an added bonus, he played alongside current Lions tackle Ndamukong Suh on a great defense two years ago, so pedigree is also a strong suit.

Castanzo is the type of safe, but sure pick the Lions need as they take the steps necessary to improve their team. Castonzo is smart (Academic All-American), and experienced as he started all four years. At 6’7” and 308 lbs, he’s got great size to play tackle. The critics point out that he could stand to gain some strength and improve his run blocking, but as a pass blocker he’s pretty damn good; just check out the clips from his matchup against top DE prospect Robert Quinn. 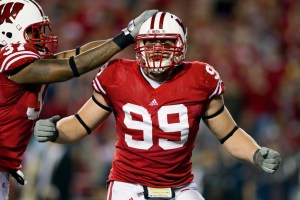 While Watt may not provide the same amount of upside as some of the other DE prospects in the draft, he is no slouch. As a former tight end, Watt provides some athleticism. But more importantly, he’s a high motor guy, with great size for the position (6’6”, 296) and he’s the sort of player that creates a lot of havoc on the field.

DE DeQuan Bowers (Clemson): Were it not for Bowers’ knee injury, he’d be a top-ten pick. Draft guru Gil Brandt thinks the Lions would be getting a steal; maybe he’s right. Personally, I think they should stay away as he poses too great a risk.

CB Jimmy Smith (Colorado): Smith has great size and athleticism and he would be filling a great need for the Lions. But he’s got some serious off-the-field issues that pose too great a risk for the Lions.

DE Robert Quinn (UNC): Quinn is a terrific prospect. He’s just too small to play end in the Lions’ defense. Quinn is better suited to play DE in a 3-4 scheme.

OT Tyron Smith (USC): Smith is ranked as the top tackle prospect by most draft gurus. Who knows, he could be the second coming of Anthony Munoz. He just seems too raw to me, but what do I know.