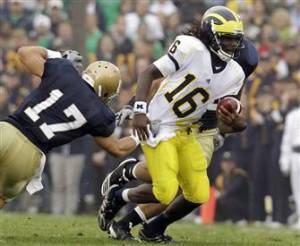 Wow.  I’m sure there are better superlatives I could use to describe Denard Robinson’s performance today, but I can’t think of one right now.  Without question, this guy has exceeded my expectations as a quarterback by leaps and bounds. How?  All Robinson did was eclipse his previous record for total offense by a Michigan quarterback (383) by amassing 502 yards in total offense.  I was off a little in my prediction (3 points) but oh well.  Generally, I feel relieved with the win.  We didn’t move the ball as well as I would have thought, but then Notre Dame is, well still Notre Dame, which means they’ve got tons of talent.  And that showed on several occasions.

For all of Denard’s heroics, we weren’t the most efficient offense (3-16 on third downs), nor were we all that productive with our running backs (only Denard averaged more than 3 ypc).  Combine that with the fact that Notre Dame’s starting quarterback Dayne Crist missed most of the 1st half and there’s much to be concerned about as the Wolverines approach Big Ten play.  Here are my heroes and goats.

Heroes: Aside from Robinson, Roy Roundtree, Daryl Stonum, Jonas Mouton, and Jordan Kovacs (for the most part)

I give Notre Dame coach Brian Kelly a lot of credit.  He had his team up for the game, his offense looked well adjusted to the new system, and his defense (aside from Robinson’s heroics) played quite well at times; especially Manti Te’o.  Kyle Rudolph is a stud (no surprise) and their offensive line played much better than I expected.  In the end, it came down to the best player on the field, and for the second week in a row, it was Denard Robinson.  Though the Wolverines were the ones with the luck today, I’ll take the win; after all, the Irish had their chances.

2 thoughts on “Tales from the Deuce”