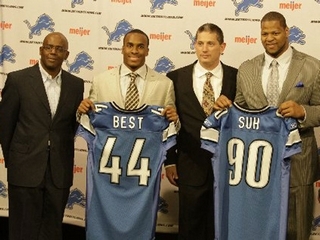 Although it’s not readily apparent from my usual posts, I am a huge sports fan.  And I’m an especially big fan of the Detroit Lions (I know sad right?).  For those of you that share my passion for the Lions, it has no doubt been a rough last few years.  Thankfully, GM Martin Mayhew – a disciple of former Pres/GM Matt Millen – has taken a series of steps to put my beloved Lions on the right track.  To be sure, the Lions will struggle next year.  My prediction is that the Lions will go 5-11 in 2010.  While that record is nothing to write home about, what’s most important about the state of the franchise is how Mayhew and Co. have re-shaped the roster.  I championed the selection of Matthew Stafford with the #1 overall pick in last year’s draft.  And while I gave them a less than glowing review for their other picks (C+), I was pleasantly surprised to see all of their picks from last year contribute.  I anticipate that the players selected in this year’s draft will provide similar results.  I would have preferred to see the Lions address the linebacker position but their selection of can’t-miss defensive tackle Ndamukong Suh gives them instant credibility.  Here’s a look at each pick.

In all of my years following the Lions, there have been very few players (Barry Sanders, Calvin Johnson, Chris Spieleman) that the Lions have selected in the draft that were as sure a pick as Suh.  In addition to having the coolest name in the draft, he was widely considered the top overall pick in the draft.  I desperately hoped that he would “fall” to the Lions at #2.  Suh was a Heisman finalist as a defensive player, and arguably the most dominant player in all of college football.  Possessing excellent strength, long arms, intensity, and a maturity to match, Suh should anchor the Lions’ defensive line for many years to come.

There is some disagreement on whether it was necessary for the Lions to trade up to pick Best.  I think it was a great move for a variety of reasons.  First, the Lions gave very little.  They moved back 28 spots in the fourth round and gave up a 7th round pick in order to move up.  I think that’s a small price to pay for getting the guy you want.  Second, the Lions desperately needed help at the running back position.  With Kevin Smith coming off of a knee injury, it was very important for the Lions to get some help in the running game.  The selection of Best solidifies their running game.  Best also possesses blazing speed (4.35 in the 40-yard dash) which gives the Lions a home run threat they haven’t had since the departure of Barry Sanders over a decade ago.  Although there is some concern that Best is an injury risk, I put faith in the doctors that have cleared him to play.

With the departure of several cornerbacks from last year’s team, it was necessary for the Lions to pick up a cornerback in the draft.  Admittedly, I’m not in love with the pick.  I’m partial to corners that have speed, and Spievey is thought of as more of a run-stuffer than a burner.  Schwartz and Mayhew think he is fast enough to play in the league, lets hope they’re right.

I don’t love this pick either.  Fox appears to be more of a project.  There are some concerns about strength, and it’s unclear whether he has the agility to play left tackle.  On the flip side, he has a lot of experience as a starter in college and he’s got great size.  If he can add a little bulk and work on technique, he could develop into a starter on the right side down the road.

Anytime you draft a player in the seventh round, all you can hope for is that they make the team and they can contribute.  At 6-4, 251 lbs., he’s a bit undersized but he was very productive in college starting 36 games for the Gamecocks over three years.  In fact, Young is just the sixth player in school history to register 20 sacks during a career; this is a list that includes Texans DE Mario Williams.

Toone has the dubious honor of being this year’s Mr. Irrelevant as the last player selected in the draft.  At 5-10 and 185 lbs., the diminutive wide receiver was very productive as a punt returner and receiver in college, and should factor in early on special teams.  He also has a very interesting background.  For starters, he’s a white guy with dreadlocks.  He’s also a mormon.  In fact, at 25 years of age, he’s a bit older for a rookie.  This is because Toone took a two-year mission while in college.

I think the goal with any draft is to select players that can contribute.  With the selection of Suh and Best, the Lions accomplished that goal.  While I don’t love the rest of the picks, Spievey will contribute early, and Toone and Young should make the team.  Further, both Suh and Best have the ability to be pro-bowl calibre players which makes this year’s draft a huge success for the Lions.  Grade: B+