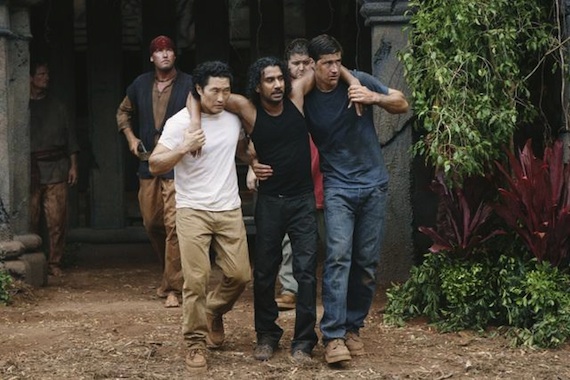 Okay, I get it.  Right around the time we found out that all of the characters on “Lost”  had met each other previously, the writers of the show decided that they would make things up as they went along (okay I don’t really believe that but the show is certainly written that way sometimes).  I’ve finally come to peace with that fact.  All I ask is that the writers reveal just a few more answers, as opposed to posing more questions.  Much to my chagrin, that has not happened thus far.  So far, the show has revealed one secret: where the black smoke monster comes from.  On the other hand, the story line has created a series of questions.  Here are a few of the most pressing questions:

1.  The alternate storyline: The final season begins  with the cast existing in two alternate dimensions (I think).  In one, we see the cast as they try to pick up  the pieces after Juliette detonates the atomic bomb.  In the other, its as if Oceanic Flight 815 never crashed.  Except this time, the now (well sort of) deceased Charlie gets busted for nearly over-dosing on the plane.  Is this some sort of dream sequence or is this an alternate plane?  Who the hell knows!

2.  Who the hell is Jacob? What about the other guy? There’s a great article on Paste’s website about how the current season is some sort of religious allegory.  Here’s an excerpt:

“If Jacob is the Jesus figure, betrayed by Judas and coming back soon, Sayid is Lazurus, brought back to life by the healing waters of the temple. In one of the opener’s best scenes, he confesses his sins—torture, murder—with his dying words. He expects no redemption, but he’s integral, we learn, in containing the wickedness of Fake John Locke to his Island prison.”

I’m not well versed on religion but I do think its an interesting theory nonetheless.

3.  Who are the “Other others?” I’ll spare you the mispronunciation of the name of the new random Asian dude, but who the hell is he and how long has he been on the island.  And whats the deal with his interpreter? What about the flight attendant?  How did she hook up with these guys and when did she get to the island.  She made it seem as if she arrived at a different time than Jack and crew.

4.  Where was Claire the whole time? At the very end of last night’s episode, Claire re-appears.  Where the hell has she been?

5.  Whats the deal with Sayid? Has Sayid fallen into the same category as Claire (although she may have been alive the whole time), Jack’s father and now Jacob?  Or has his body been inhabited by Jacob? I don’t think the latter holds true because the “Other others” seem to suggest that Jacob was an ally so I doubt Jacob is now inhabiting Sayid’s body.  And what was in the pill?

Feel free to leave your thoughts.  I’ve enjoyed it somewhat thus far, but I’m really wondering where this is all going!

2 thoughts on “Lost in Thought”