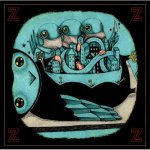 #3.  My Morning Jacket, Z (2005): Louisville’s favorite sons My Morning Jacket established a strong following as a band playing southern-style grunge rock that had a certain appeal to the  “jam band” crowd.  With their previous album It Still Moves, the band firmly entrenched themselves as a modern day Crazy Horse,  high pitched vocals and all.  So it was a pleasant surprise when Z was released.  Eschewing a more traditional  lineup and sound by adding keyboards, Z was indeed more 3-dimensional than anything they had ever recorded.  Naturally, Jim James’ soaring near-falsetto vocals still remained.  However, gone – at least for the most part – was the sometimes excessive reverberation of every lyric.  Instead of cliched jam-band tunes with hour long guitar solos, the music is much less formulaic.  The first part of the album is almost entirely psychedelic sounding more like Pink Floyd than Lynyrd Skynyrd.  The sonically enriched “Gideon” proved that MMJ was more than a one-trick pony.  But the album isn’t great simply because of its production.  MMJ brings in other influences.  On “What a Wonderful Man,” the group does their best take on reggae.  Sure Bob Marley may have been turning in his grave, but the effort is earnest.  You’ll be thrown for a loop with the unlikely “Into the Woods,” but the record shines again with the power pop anthem “Anytime.”  Then, just to remind their fans that they still have their jam-band bona fides, they lay it down heavy with “Lay Low,” a jam that would make Dickey Betts blush.

One thought on “The Greatest Albums of the 2000s”