Recently, Pitchfork unveiled their list of the 200 greatest albums of the 2000s.  Naturally, I took issue with some of their selections; particularly in the top 20 (see Modest Mouse).  So my buddy Scott and I decided to put together lists to compare.  To no surprise, our lists featured a few similarities and a few differences.  I decided I would do a countdown to #1, so here goes: 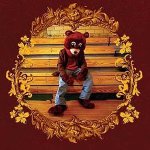 : Perhaps, the most accessible rap  album made in the last ten years.  Only West, with all of his ambition, hubris, and creativity could create such a product.  Doubtless, there have been at least a dozen other rap albums  produced in the last decade that showcase more in the way of lyrics and sheer MC skill.  But none have been more relevant.